I had not cooked a tagine before going to Morocco in 2018. That was somewhere that had been on my travel wish list for so long and it was wonderful to have finally made the trek over. We spent half our time on a personalised tour with the amazing Jaouad from Infinite Morocco tours and my only request to him was ‘no tourist food please’. And so, we were taken to back streets, alleys, souks and side of the road vendors who had tagines of all sorts bubbling away on little fires…. my love affair with tagine cooking had definitely commenced. The smell was the first thing that got me!

The word tagine is both the name of the dish and the earthenware pot in which it’s cooked. The Moroccan varieties (like those above) have round, shallow bases with conical lids. I’ve also come to find there are others such as the Egyptian tagine (like the one below). These are more like a traditional pot and have a slightly dome-shaped rather than cone-shaped lid.

Whilst the Moroccan tagine itself is beautiful (so is the Egyptian one!), the shape also serves a function. The conical lid traps in steam as the food cooks. The steam then circulates from the lid to the base allowing continuous and even heat to cook the meal inside. This also reduces and concentrates the liquid which caramelises the food. What you end up with as a result is a dish full of rich and exotic flavours. Honestly, I have no idea why I didn’t get onto these sooner.

The earliest mention of a tagine in history was in the 8th Century. It then appeared in Arabian Nights (a collection of Middle Eastern folk tales) in the 9th Century. Tagines were traditionally cooked over coal and still are however, they can also be made in the oven or on the stove top. They continue to be enjoyed in the Middle East and North Africa and are often savoury stews. They might contain things like meat, poultry or fish, vegetables, dried fruit, nuts and an array of spices. The ingredients used have changed over time given conquests and trade, and they continue to evolve today.

And so – after a little history, on to the recipe! If you prefer you could easily make this a vegetarian tagine. I tend to make vegetable varieties most but used chicken here because we had some that needed cooking. If removing the chicken, just add more vegetables of your choice but I would avoid watery varieties like zucchini. Enjoy!

The rich and exotic flavours of this chicken and vegetable tagine will transport you straight to the Souks of Morocco.

If you’re after some other serving suggestions, I love this tagine with a big dollop of labneh on it too. 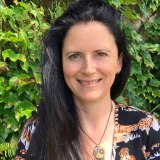 Hello! And welcome to The Tolerant Table. I'm Gabby, a Sydney-based Naturopath and Nutritionist with a clinical interest in gut health, autoimmune disease and hormonal health. Read more

Sat & after hours appointments by request